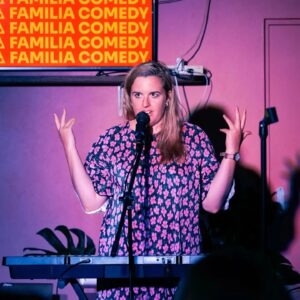 I’m all the better for talking to you. I’m also five coffees in so I am WIRED.

Are you playing any shows this weekend?

Yes!! I’m off to Adelaide this week so I have Friday and Saturday shows at the Adelaide Fringe Festival as well as some spots at variety shows. It’s the very beginning of my tour so I am KEEN.

I recently saw you perform at the Newcastle comedy club, it was incredible! Can you tell us a little bit about your new show ‘Wife’?

Thank you! That’s so kind of you. This show is one I’ve been working on for about a year, it’s a combination of musical comedy and stand-up and is more or less about the transformative power of rage, but the subject matter goes all over the shop – from how much I hate Teslas, to how much I hate group chats, to how much I hate corporate speak…wait, I’m seeing a theme here. But at the same time, it’s about how much I love and appreciate my friends (no spoilers here, come to the show if you’re confused).

Were these themes something that you have been wanting to explore?

Yes! Weirdly the songs come first…I wrote about three songs then was like ‘oh I see a theme emerging here’ (me being angry about everything, and how to put that anger to good use).  Then I put together the show around that. It’s the first time I’ve reverse-engineered a show, so I put together the overall structure and had holes for songs (eg “I want a short, punchy, stupid song here” or “I need something a little slower and more reflective in this spot). The more I wrote, the more I clarified what I was thinking and what I wanted the show to say, and most importantly, what experience I wanted the audience to have (laugh/cry/think).

‘Wife’ is such a fun show to not only listen to musically but your stand-up vividly  brings the songs to life in the most comical of ways. Was it an enjoyable process putting the set together and writing the songs?

Yes! I’m a musical comedian first so the songs all came first, then I sat and word-vomited what I wanted the show to say (more like an essay than anything actually funny). From there I pulled out little pieces of writing/stand-up that I thought I could use in the show, then punched it up and punched it up and drafted and drafted and split it between the songs until I got the version you saw at my trial show. Then back to the drawing board (because some stuff works with an audience, some doesn’t – the joy of a trial show) until I have the final product. Even then, the show will change the more I perform it on tour. That’s why we wait until the very end to film it.

I particularly enjoyed your song ‘Wasting My Time’. It was utterly hilarious (like all of your tunes) but it seemed to have a more satirical or self-reflective undercurrent. Was this by design and/or did you want the audience to feel a certain way?

I really resisted doing anything Covid-related because I feel like audiences will come to comedy to forget the shit show that has been the last two years. But truly this song is literally just an honest reflection of how I’ve spent 2020 and 2021….sitting at my house watching people on instagram apparently being super successful and productive and feeling like I’m falling behind. I experience anxiety and depression so this song is a direct representation of what those feel like to me – stressing about not being good enough, and then not having the energy to do anything about it (yes, this is a comedy show!!! She’s hilarious!!!). The first version of this song was deeply unfunny, then I redrafted to add humour because…humour is how I cope with everything (I’ll be the guy making inappropriate jokes at the worst moments).

Also, what is bouldering? I’m unfamiliar with it.

As far as I’m aware it’s literally rock climbing but you’re climbing…boulders instead of straight up a wall. And there’s no ropes (I had to google this to answer this question, that’s how invested I am in bouldering). I should probably go bouldering one time so I have some idea of what I’m talking about but the venn diagram of shit men I’ve dated, and people who boulder, is a circle.

No one is really safe at your show. You seem to cover most bases when making fun of people in song. One in particular ‘Group Chat’ is very relevant to our lives. How do you ride the line between offending people and having the room belly laughing at themselves?

I constantly mention feeling ‘seen or attacked’ in the show – every comic has their own line and we all know comics who love going way too far or offending people. I want everyone to have a great time at my shows, so I always ask myself two things – ‘is this punching up’ and ‘if the audience is full of people this joke is about, would I be able to live with myself’. ‘Punching up’ is a term writers use that just means the joke is at the expense of someone who structurally and traditionally has more power or privilege than yourself. It’s very ‘fight someone your own size.’ So if my audience was full of men called Ethan who work in finance and go bouldering five times a week… I could definitely live with myself. And the group chat song? That’s literally my own experience. I love and hate group chats but noticed everyone falls into one of ten categories…so thought I’d sing about it.

What is this card thing that you are selling at your shows?

GREAT QUESTION!! OK I’m literally so excited about this, my album WIFE (drumroll) is available in 2022 via DROPCARD. The future is here – instead of selling on USB or CD I’m selling the album on gorgeous cards that contain a link and a unique code so people who come to my show can purchase the card and download my album. It will be available after my shows and some will be available for purchase on my website.

Will there be a ‘Sarah Gaul’ album coming out in the future?

You know it! WIFE (The Album) will be available from February 2022 and contains all the tracks from the show as well as some fun extras and live recordings. I am PUMPED and working on this album with you guys has been the most fun. Real talk – working with you guys was the highlight of my 2021 and working with you is such an unbridled joy. You brought it to life and I couldn’t be more grateful or excited to share it with the world.

Thanks so much for chatting!

No – thank YOU! I can’t wait to share a Newtowner with you guys soon! Also to write a new album full of exclusively church-bell music (for the reader: it was a running joke that we had waaay too much churchbell action in a lot of our songs). Peace x

Sarah is kicking off her tour in Adelaide from the 18th – 26th of March, then heading to Melbourne on the 31st of March until the 9th of April, then she will finish up in Sydney, playing from the 5th – 8th of May.

Make sure to catch Sarah at one of her shows! More info about Sarah, tour dates/venues and links to her music can be found here www.sarahgaul.com or on Instagram https://www.instagram.com/empireofgaul/ and Facebook https://www.facebook.com/sarahgaulness/